On August 3rd, an officer was dispatched to a parking lot on James St. for a report of a larceny of a motor vehicles tires and rims. On scene, the victim reported he parked his car for the night and the next morning he observed all four tires and rims were gone. The vehicle was placed on top of two liter soda containers.

On August 3rd, officers assisted the Park & Open Space Department at the grand reopening of Warren Field at 133 Eliot Street. While on scene, officers gave young community members an opportunity to sit behind the wheel of a Brookline Police cruiser. One community member reported not being able to see over the steering wheel or touch the pedals. 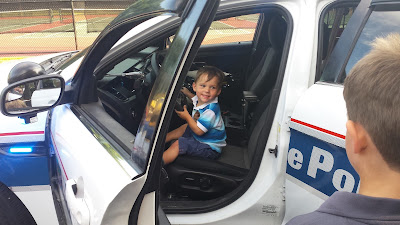 Future Brookline Finest.
Posted by CSD Intern at 11:19 AM