Larceny/Shoplifting: 11/29 at 5:14pm – Harvard St
Officers responded to a report of a shoplifter in custody. The loss prevention manager of the store reported that he observed a female suspect exit the store after placing several items into her bag without paying for them. Female suspect was placed under arrest and charged for Shoplifting.

Larceny: 11/28 at 1:55pm – Commonwealth Ave
General Manager of a store reported that cash was stolen from her purse, which was left inside the manager’s office. Video surveillance revealed that a male suspect was inside the office and reached to the area where the purse was located. Officer requested an arrest warrant for the suspect for Larceny from a building..

Larceny/Shoplifting: 11/29 at 1:46ppm - Harvard St
Officers responded to a report of a shoplifter who became physical with the store security officer. The security officer reported that he observed three male suspects hiding merchandise inside a backpack. A brief struggle occurred when the security officer attempted to stop the fleeing suspects from exiting the store. Two of the suspects were placed under arrest and charged for Juvenile delinquency, to wit shoplifting and assault and battery.

Traffic Offense: 11/29 at 9:02am – Harvard St/Harris St
Officer observed a vehicle traveling through a red light. A query check revealed that the driver had a revoked and uninsured vehicle registration. Driver was place under arrest and charged for red light violation, revoked registration, unregistered and uninsured motor vehicle.

Fraud: 11/29 at 12:15pm – Beaconsfield Rd
Victim reported that three unauthorized transactions were made on his debit card from Nottingham, England.

B&E&L of MV: 11/29 at 8:00pm – Craftsland Rd
Victim reported that someone entered her vehicle overnight. The vehicle was left unlocked in her driveway.
Posted by CSD Intern at 11:52 AM No comments:


On 11/24, officers conducted a follow up investigation of Breaking & Enterings on residences in Cushing Rd and Beverly Rd after receiving calls of two suspicious suspects. Caller stated that the two male suspects were on his property on Cushing Rd, and fled in a vehicle towards Milton Rd. Officers received a second call from a resident of Beverly Rd who reported that the front door to their residence was damaged and broken into. Similar incidences were reported in the Hyde Park area of Boston. Based on evidence gathered at each scene, Brookline Detectives were able to identify two suspects to be involved in the Breaking & Entering cases. On 11/28, detectives successfully executed the arrest warrants and arrested of the two suspects. Case is still ongoing.

Posted by CSD Intern at 1:37 PM No comments: 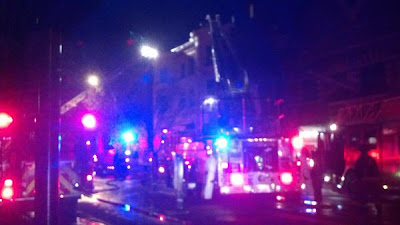 Larceny: 11/26 at 2:30pm – Egmont St
Victim reported that his front license plate may have been stolen from his parked vehicle in front of Egmont St. Victim also noticed damage to the front bumper where the license plate holder was located.

Larceny/Shoplifting: 11/28 at 12:02pm – Beacon St
Officer responded to a male suspect in questioning for shoplifting. Video surveillance revealed that the suspect and a female suspect exited the store without paying for several items. The male suspect was placed under arrest and both suspects will be charged for shoplifting.
Larceny: 11/28 at 3:09pm – Davis Ave
Resident stated that he returned home from a bike ride and upon approaching his apartment, observed a subject inside the apartment. Resident reported several items stolen. The subject is last described wearing a dark jacket or sweater.

Burglary: 11/28 at 9:00am – Washington St
Victim reported that someone had forced into her apartment and stole several personal belongings. Victim stated that the door was left unsecured.
Protective Custody: 11/29 at 12:23am – Beacon St
Officer was dispatched to a report of a disturbing customer. The male subject was visibly intoxicated and agitated. Subject was placed into protective custody.
Posted by CSD Intern at 9:55 AM No comments:

Larceny: 11/16 at 4:00pm – Beacon St
Victim reported that her wallet was stolen and fraudulent charges were made to credit/debit card.

Malicious Damage Auto: 11/26 at 6:30pm – Washington St
Victim stated that he returned to find that his parked vehicle had been keyed.

Larceny: 11/26 between 11:56am & 1:20pm – Commonwealth Ave
Victim stated that he returned to find that his secured locker had been tampered with, and personal belonging were found taken from within the locker.

Traffic Offenses: 11/26 at 1:45pm – Harvard/Beacon
Officer observed a vehicle operating with a rejection sticker. A vehicle’s registration check revealed that the operator had an expired license status. Operator was placed under arrest and charged for operating a motor vehicle without a license.

Larceny: Between 11/19 & 11/26 – Washington St
Victim reported her parcel packages either stolen or rummaged through, over several separate dates.

Malicious Damage: 11/26 at 2:30pm – Beaconsfield Rd
Victim stated that he returned to find that his glass window was smashed.
Posted by CSD Intern at 10:09 AM No comments:

Larceny: 11/25 at 2:17am – Harvard St
Victim stated that after asking a subject to take a picture of him and his girlfriend with the victim’s cell phone, a male subject walked away without returning the phone. Subject is described as a tall male with short black hair, clean shaven, wearing a gray t-shirt and jeans.

Not Duly Licensed: 11/26 at 12:02am – Beacon St
Officer observed a vehicle making an illegal left turn. A vehicle’s registration check revealed that the operator had a revoked license status and was unlicensed to operate. Operator was issued a citation for the turn violation and being not duly licensed.

Not Duly Licensed: 11/26 at 12:37am – Harvard St
Officer observed a vehicle travelling without headlights. Operator was placed under arrest for Operating without a License and Failure to Display Headlights.

Larceny: 11/23 at 3:39pm – Beacon St
Store manager reported that a dummy phone had been left in place of a real cell phone that was on display.

Operating After Suspension: 11/24 at 7:30pm – Washington St
Officer observed a vehicle failing to stay within the marked lane of travel. A query of the vehicle's registration revealed that the registration was revoked. Driver will be charged for Operating After Revocation (Registration), Operating Uninsured Motor Vehicle, and Marked Lanes Violation.

OUIL: 11/25 at 1:16am – Harvard St
Officer observed a vehicle with its headlights not illuminate, making an illegal U-Turn. Upon approach, officer detected a strong odor of alcohol coming from the vehicle's interior and observed the operator having slurred speech, blood shot eyes, and difficulty keeping her eyes open. Operator was placed under arrest and charged for Operating Under the Influence of Intoxicating Liquor, Improper Left Turn, and Failure to Display Headlights.

Possession of Marijuana: 11/23 at 6:50pm – Dudley Way/Lee St
Officer observed a vehicle traveling at a high rate of speed. Upon questioning, officer could smell a strong odor of Marijuana. A search revealed numerous bags of marijuana in vacuum sealed bags. Subject was placed under arrest for Possession with intent to distribute Class D Marijuana.

Burglary: 11/20 at 5:00pm – Beverly Rd
Victim stated that they returned from vacation to find that their door had been forced open and several rooms were ransacked.

Burglary: Between 11/5-11/11– St Paul St
Resident reported that he returned from being out of the country to find that his apartment had been broken into and items of value were found missing.
Posted by CSD Intern at 1:27 PM No comments: