Good Work by Off Duty Officer

Nice arrest yesterday of a subject stealing packages from residences in Brookline and Brighton. Scheduled to be arraigned today in Brookline District Court  Summary of events, at approximately 4:16PM. on Thursday May 30th, an off-duty Brookline police officer made note of a suspicious male in the 1500 block of Beacon St. The officer monitored this individual inside the inner vestibule of a multi-story apartment building and observed him placing what appeared to be a previously delivered parcel into a GRUBHUB-labeled insulated delivery shoulder bag. The officer contacted Brookline Police Dispatch, advised them of his observations, and units responded to the building to assist in the investigation The officer inquired of the suspect who claimed he was making a delivery to an upper floor in the building. This male quickly traversed the stairs inside the building and returned with the insulted GRUBHUB shoulder delivery bag now empty. During the threshold inquiry the subject claimed to be employed by GRUBHUB and DOORDASH. Investigation revealed there was no actual delivery, and this individual had not delivered for either GRUBHUB or DOORDASH in weeks. The investigation further indicated no resident of the multi-story building had requested food delivery from either company today, and that the subject had used a screwdriver to manipulate the interior vestibule locking mechanism to gain entry into the building. A further investigation found that a 2012 white Dodge Caravan was registered to him. A search of the area found the van parked on Fairbanks St. Numerous Amazon packages were within plain view inside the van. This van was towed and secured pending application for a search warrant. Suspect is 38 years old from Lawrence, Mass. Subject to be arraigned today in Brookline District Court, charged with breaking and entering during the daytime, several counts of larceny, possession of burglarious tools, larceny in a building, and multiple counts of receiving stolen property based on the stolen packages located inside the van after the execution of the search warrant. 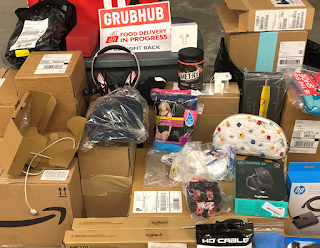 7:36AM: Police were dispatched to Beacon Street for a past larceny of a package. The reporting party noticed several open and rummaged through packages in the vestibule at 7:20AM this morning. The packages were undisturbed the previous night, May 28th, at 9PM. The packages were submitted as evidence for processing. This case is under investigation.

6:05PM: A citizen came to the Police Station to report a bike larceny. The bicycle was left locked to a fence on Cypress Street on May 24th. The reporting party noticed the bicycle missing on May 27th. A coworker last saw the bicycle on May 25th. Both the bicycle and the lock are missing. Police are investigating.
Posted by CSD Intern at 12:44 PM No comments:

3:25PM: Police responded to Davis Avenue for a report of possible exposure to rabies. The reporting party stated that a wild bat had been hiding in her home since Friday, May 24th. The bat was captured and sent to the State Lab for testing. Everyone in the home has their rabies vaccination completed.

8:23PM: Officers were dispatched to Worthington Road for a report of a stolen bicycle. The reporting party told police that he left home at 7:30AM this morning. When he returned at 8:10AM his bike was missing from the driveway, however, a gray Schwinn bicycle was left in its place. The stolen bike is described as a black and blue Masi-Alare bicycle. Police collected the Schwinn bicycle for evidence.
Posted by CSD Intern at 12:43 PM No comments:

8:17AM: Police were dispatched to Brookline Avenue for a report of an armed robbery. Multiple units canvassed the area for a 30 year old Hispanic male who threated someone with a knife. The reporting party was walking through the Emerald Necklace when a man approached him from behind. The suspect demanded “give me your wallet or I’ll stab you.” The subject fled with the wallet towards Aspinwall Avenue and Brookline Avenue. Officers searched the area for a man wearing black pants, multicolored shoes, and a black leather hat. The suspect was not located.

1:59PM: Officers responded to Dean Playground for a past larceny. The reporting party stated that her son left his backpack at the park at 4:30PM on May 24th, 2019. The reporting party returned on May 27th at 2:43PM to search the park. She located her son’s books on a picnic table; they appeared to be left overnight. The reporting party could not find the backpack or the laptop that was inside. This case is under investigation.

4:47PM: Police were dispatched to Harvard Avenue for a report of bike theft. The reporting party locked her bike to the porch at 3:30PM. At 4:40PM she noticed the bicycle was missing. The item is described as a black City Bike that can be folded up and carried. Police are investigating.
Posted by CSD Intern at 12:42 PM No comments:

12:24PM: Police were dispatched to Harvard Street for shoplifting. Officers were met by the Loss Prevention Specialist who had stopped a male from shoplifting. The merchandise was returned and the suspect was summonsed for shoplifting.
Posted by CSD Intern at 2:04 PM No comments:

4:47PM: Police were dispatched to a business on Beacon Street for a report of larceny. The reporting party stated that her wallet was stolen from a local grocery store. She had her wallet in her open purse while shopping. After looking at produce, the reporting party noticed her wallet was missing. She attempted to retrace her steps but could not locate the item. This case is under investigation.

6:48PM: Officers responded to Harris Street for a report of a larceny. Upon arrival, police spoke to the care giver of a group home. She stated that every day she leaves her purse on the sofa in the living room area. Today she left the item at 3PM and when she returned at 6:30PM it could not be located. Police are investigating.
Posted by CSD Intern at 2:04 PM No comments:

1:59PM: Officers were dispatched to Cypress Street for a larceny report. Upon arrival, police spoke to the reporting party who noticed several power tools missing from his garage. The reporting party believes the man responsible is working as a contractor in the area and riding a motorcycle. Officers located the motorcycle in question and found it to be reported stolen. The suspect was located and arrested for receiving stolen property.
Posted by CSD Intern at 2:03 PM No comments:

2:22PM: Police were dispatched to Harvard Street for a report of shoplifting. The reporting party told officers that a man was caught stuffing shirts into his backpack. The man returned the clothing items and was summonsed for shoplifting.

3:29PM: Officers responded to Naples Road for a reported theft of a bicycle. The reporting party noticed the bicycle missing at 7:50AM on Monday, May 20th. The bike was last seen locked to the front porch at 5PM on Sunday, May 19th. The item is described as a 2014 gray Diamondback Adult Trace hybrid bicycle. Police are investigating.
Posted by CSD Intern at 8:53 AM No comments:

10:56AM: Officers responded to Heath Street for a report of found property. The reporting party located a bicycle in her front yard against the bushes at 8AM this morning. The bike is a Red Specialized Ruby Expert Road bike with white handlebars and a white seat. There is a Landry’s Bicycle’s sticker on the bike. Police are attempting to identify the owner of the found bike.

2:05PM:  Multiple units were dispatched to Harvard Street for a shoplifting in progress. The reporting party stated that she noticed a male steal an unknown brand electric scooter from an aisle. The suspect is described as a white male in his 20’s, wearing a white zip-up jacket, light blue jeans, a white hat, and a backpack. Police searched the area but could not locate the subject.

4:08PM: Police were dispatched to Beacon Street for a report of a larceny. The reporting party stated that she last saw her wallet at 2PM when she used it at a Scrub a Dub. She left her vehicle unlocked with her purse in the passenger seat while she spoke to an employee. The reporting party believes this is when her wallet was stolen. This case is under investigation.

8:18PM: Officers responded to Glendale Road for breaking and entering of a motor vehicle. Upon arrival, police spoke to the reporting party that stated his car had been entered sometime between 12AM and 8AM on Tuesday, May 21st. The vehicle was left unlocked overnight. The reporting party was on his way to work when he noticed some of his belongings on the ground outside of the vehicle. He inspected the vehicle further and noticed a cup full of change was missing. This case is being investigated.

8:24PM: Several units were dispatched to Boylston Street for a report of attempted shoplifting. The manager of a business told police he had seen a man enter the store who had shoplifted in the past. The manager observed the man conceal several items and attempt to flee. The manager confronted the man and the merchandise was returned. Police located a man matching the description of the suspect and arrested him for shoplifting.

Posted by CSD Intern at 8:51 AM No comments:

9:10AM: Police were dispatched to Orchard Road for a theft report. Upon arrival, officers spoke to all the residents of a home that had been ransacked recently. The roommates noticed important documents and $300 missing from one of the bedrooms. Officers are investigating this case.

3:34PM: An Officer was dispatched to a business on Commonwealth Avenue for a report of larceny. The reporting party stated that he left his wallet in a secured locker at 2:30PM. When he returned at 3:30PM, the lock was broken off the locker and $90 was missing from his wallet. This case is under investigation.

9:06PM: Police responded to an unarmed robbery on Harvard Street. Units in the area were searching for a man who had reached over the counter and took money directly out of the cash register. The cashier attempted to block the man, but he said “don’t do that” and continued to steal an unknown amount of cash before fleeing. The subject is described as a 40 year old black male, wearing gray pants, a black zip-up, and a black baseball cap.
Posted by CSD Intern at 8:49 AM No comments: