Operating After Suspension: 10/26 at 7:03am – Carlton St
Officer observed a taxi driver make an improper left turn onto Carlton St. a vehicle registration check revealed that the driver of the vehicle had a suspended license status. Driver was placed under arrest and charged for operating after suspension and left turn violation.

Malicious Damage: 10/25 at 9:49pm - Weybridge Rd
Victim stated that a window of her carriage house was broken into. No items of value were taken.

B&E&L of MV: 10/25 at 9:38 – Washington St at Greenough St
Victim stated that she left her vehicle parked for approximately an hour and returned to find that the back window was smashed with a rock. One item was found missing.
Posted by CSD Intern at 8:13 AM No comments:

-At 6:50pm, victim stated that the rear window of her vehicle had been smashed and items had been taken. Victim was advised to cancel her credit cards and call her banks to report that her checks were stolen.

-At 6:30pm, victim stated that her front passenger window of her vehicle was found smashed and the Glove compartment and center console were left opened. Personal items were discovered missing.

-Between 6:00pm & 7:35pm, victim stated that her front passenger side window of her vehicle was found smashed, glove compartment and the center console were left open. One item was found missing.

-Between 6:00pm & 7:35pm, victim stated that her front passenger right side window of her vehicle was smashed and the glove compartment and the center console were open. No items were missing inside the vehicle

Larceny: B/t 10/23 at 3:00pm & 10/24 at 6:00am – Cypress St Officer responded to a report of a larceny. Victim stated that he left an item in the rear alleyway off of Boylston Place and returned to find that the item was stolen.

Not Duly Licensed: 10/24 at 10:31pm – Washington St
Officer observed a vehicle traveling with an expired inspection sticker. A query check revealed that there was no status for an operators license for the driver. Driver was placed under arrest and charged for not being duly licensed and the operation of a motor vehicle with an expired inspection sticker.

Larceny: 10/24 at 5:33pm – Washington St
Officers received a call of a shoplifter fleeing a store. An officer stopped a suspect fitting the description of the shoplifter at the corner of Washington and Greenough St. Store employee identified the suspect to be the same person as the shoplifter. Suspect was placed under arrest and charged for shoplifting.

Fraud: 10/21 at 4:14pm – Rockledge Rd
Victim reported that he had been a victim of fraud. Victim reported fraudulent transactions were made to his account. Victim was advised to cancel his debit card and talk to his bank.

Forgery: 10/10 at 4:28pm – Clyde St
Caller reported that a bad check was passed at a shop. Caller stated that a white male subject about 6"2 in his late 40's had purchased items with a forged check. The check was rejected by the bank because it had an invalid routing number.
Posted by CSD Intern at 9:48 AM No comments:

Warrant/Apprehension: 10/24 at 12:42am – Beacon St/Englewood Av
Officer observed a vehicle traveling at a high rate of speed. A vehicle registration check revealed that the registered owner had an active warrant. Owner was placed under arrest for the warrant and charged for speeding.

Burglary: 10/23 b/t 10:30am & 1:00pm – Circuit Rd
Victims reported that antique items had been taken from their home. Victims stated that their door was left unlocked.

Larceny: 10/23 at 8:15am – Green St
Victim stated that he left his car unlocked while making several trips in and out of the building to unload items into his vehicle. It was during a trip when the victim noticed items missing. There is no further information to report at this time.

Straight Warrant: 10/23 at 10:42am – Harvard St
A query of a vehicle’s registration check revealed the registered owner had a warrant. Owner of the vehicle was placed under arrest for the warrant.

Officer was dispatched for a report of a shoplifting in progress. Upon arrival, officer was unable to locate any individual fitting the descriptions given by dispatch. Store manager stated that an employee observed a male suspect shoplifting in the store. When questioned, the suspect exited the store and fled on foot towards .  Suspect will be charged for shoplifting.


Operating After Suspension: 10/23 at 12:14pm – Centre St
Officer observed a vehicle traveling without an inspection sticker. A query of the vehicle's registration revealed that the operator had a Suspended License status and the vehicle's registration was revoked. Operator was placed under arrest and charged for Operating After Suspension, Operating After Revocation, Operating Uninsured Motor Vehicle, Failure to Submit Vehicle for Inspection, and License not in Possession.
Posted by CSD Intern at 10:27 AM No comments:

Warrant/Default: 10/22 at 12:56am –Washington St/Evans Rd
A query check revealed that the operator of a vehicle had a default warrant. Operator was placed under arrest and charged for the warrant and marked lanes violation.

OUIL/Accident: 10/22 at 11:59pm – Harvard St/Fuller St
Officer observed a vehicle crash into the sidewalk of Harvard St. Driver approached the officer and stated that it was her vehicle and that she did not need medical attention. Officer noticed that the driver was slurring her words, unsteady on her feet, had red glossy eyes, and there was also a strong odor of alcohol from the driver. A query check revealed that the vehicle had a revoked registration status. Driver was placed under arrest for Operating Under the Influence of Intoxicating Liquor and charged for Operating to Endanger and Marked Lanes and No License in Possession, Operating an Uninsured Motor Vehicle (Revoked), and Operating to an Unregistered Motor Vehicle.
Posted by CSD Intern at 8:03 AM No comments:

10-15lbs of Marijuana found in Brookline 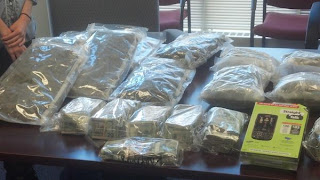 Detective received a call from an officer of the Sacramento California Drug Task Force who informed him that a package containing 4-5lbs of marijuana had been sent to a tenant of Freeman St. Officers responded to the location and spoke with the front desk security officer. They informed officers that several packages had been sent to the same tenant but was picked up by who subjects who were also tenants of the building. Security officer confirmed that the tenant whom the package was originally sent to was not a tenant of the building. Officer arrested two subjects who claimed the package and was charged with: Subject 1- Possession of Class D with Intent to Distribute within a Park Zone (Still Street Park). Subject 2- of Class D with Intent to Distribute and the three outstanding warrants. A third subject turned himself into the police and will be charged for Possession of Class D with Intent to Distribute. At 8:15pm that day, officers executed a search warrant and revealed a total of $117,00 in cash and 10-15 pounds of marijuana. Case is still ongoing, with one other suspect in pursuit.
Posted by CSD Intern at 2:20 PM No comments:

Possession Cocaine: 10/20 at 8:32pm - Coolidge St
Detective observed suspicious activity in an area that is known to be a site of high drug activity. A vehicle registration check revealed that the operator had a suspended license status. Detective approached the subjects and requested additional backup. Officers uncovered controlled substances from the subjects. Subject 1 was placed under arrest for Possession Class B drug - Cocaine and Possession Class E drug, Subject 2 was placed under arrested for Klonopin as well as Possession of Marijuana (Less than 1 oz.). Subject 3 was issued for One Way Violation and Possession of Marijuana civil violation.

Larceny: 10/20 at 12:21am – Harvard St
Officer responded to a report of a stolen cell phone report. Victim/Hostess stated that she left her cell phone at the check in/out station in the restaurant and returned to find it missing.

Larceny/Shoplifting: 10/19 at 6:45pm – Harvard St
Loss Prevention Officer stated that he observed a female subject take items from the shelves and placed them in her bag. Subject will be charged for shoplifting.

Larceny/Bike: 10/8 at 8:00am & 10/13 at 12:00am – Sewall Ave
Victim stated that his bicycle was taken from the garage in the rear of his apartment building. Victim stated that he left his bike unlocked and that other residents in the building have a code to access the garage.

Disorderly Person: 10/20 at 1:26am – Kilsyth Rd
Officer responded to a call for three white male subjects fighting on the porch. Reporting party stated that he saw three intoxicated males yelling, arguing, and wrestling around. Officer and other units questioned the subjects. Upon questioning, officer noticed one subject to appear heavily intoxicated, smelt of marijuana, and was being uncooperative, disrespectful, and impatient. Subject was placed in hancuffs and will be charged for Disorderly Person, Resisting Arrest, and cited for Possession of One Ounce or Less of Marijuana.

Larceny: 10/17 at 1:00pm & 10/18 at 11:00am – Heath St
Victim stated that her wallet was missing from her apartment. Victim stated that there was no sign of a force entry into the apartment and nothing else missing.
Posted by CSD Intern at 2:15 PM No comments: