B&E&L of MV: B/t 9/26 at 9:00pm & 9/27 at 6:45am – Country Rd
Victim discovered that his vehicle had been rummaged through. Both the glove box and the center console were found open. Several items were found missing. There was no damage to the vehicle.

Operating After Suspension: 9/27 at 10:35am – West Roxbury Parkway
Officer observed a vehicle to be traveling at a high rate of speed. A query check revealed that the operator of the vehicle had a suspended license status. Operator was placed under arrest and charged for operating after suspension, Not Duly, Speeding.

Straight Warrant: 9/27 at 1:42pm – Playstead Rd. Medford
Officers placed suspect under arrest by virtue of a Straight Warrant. Several items were seized in the process.

B&E of MV: B/t 9/26 at 7:15pm & 9/27 at 6:00am – Coolidge St
Victim stated the she discovered that her vehicle had been rummaged through. The center console and the glove box were both open but no items were found missing. There are no suspects at this time.

B&E&L of MV: B/t 9/26 at 9:30p & 9/27 at 8:00am –Hamilton Rd
Victim discovered that his driver's side door was left slightly ajar, and noticed the vehicle had been rummaged though. Victim discovered several personal items missing.

B&E&L of MV: B/t 9/26 at 8:15a & 9/27 at 5:35p – Thorndike St
Victim reported that his vehicle had been rummaged through and items were missing. Victim stated that he may have left his vehicle unlocked overnight.

B&E&L of MV: B/t 9/26 at 12:00p & 9/27 at 7:30a –Abbottsford Rd
Victim stated that that his unlocked vehicle had been entered while parked in his driveway. Victim discovered that the interior of his vehicle had been rummaged through and found one item missing.

Larceny-Bike: 9/27 b/t 12:00pm & 6:00pm – Station St
Officer responded to a report for a larceny of a bicycle. Victim reported that he left his bicycle locked to a bike rack.

B&E&L of MV: 9/26 at 11:00pm & 9/27 at 7:19pm – Columbia St
Officer responded for a report of a past Breaking and Entering of a motor vehicle. Victim stated that she noticed that the interior of her vehicle to have been ransacked but no items were found missing.

Larceny-Building: 9/26 at 9:00pm & 9/27 at 7:15am - Columbia St
Officer responded to a past report of a bicycle larceny. Victim stated that his garage door was left opened because it was broken. Bicycle, along with several other items were found missing.

Larceny-Building: 9/27 b/t 9:35am &10:25am - Tappan Street
Officer responded to a report of cell phone thefts. Victims stated that they left their cell phones in a an unlocked locker of their gym. After further investigation, officers charged a suspect for 2 counts of Larceny from a Building.

Burglary: B/t 9/27 at 7:15am & 6:00pm – Cypress St
Officer responded to a report of a past breaking and entering. Victim stated that he returned to his apartment because his roommates informed him their apartment might have been burglarized. Residents of the apartment discovered their rooms had been rummaged through and personal items had gone missing.

Larceny-Bike: 9/27 b/t 11:10am & 11:28am- Cypress St
Victim reported that his bicycle had been stolen from his back yard sometime in the last fifteen minutes. Victim stated that he left the bike against the fence in the common parking area in the rear of his home.
Posted by CSD Intern at 10:36 AM No comments:

Operating After Revocation: 9/26 at 11:27pm – Commonwealth Ave
A random query revealed that the license status of the registered owner of a vehicle, carried a revoked status. Operator was placed under arrest and charged with Operating after Revocation.

Larceny-Shoplifting: 9/26 at 3:10pm – 9/26 at 12:55am – Beacon St
Caller reported that a male and female suspect had stolen items from the store. Female suspect was placed under arrest and charged with 3 counts of Shoplifting.

General Information: 9/26 at 7:18pm – Ackers Tr
Victim reported that an unauthorized withdrawal was made to his account.

Acc-MV: 9/26 at 4:00pm - Boylston St and Hammond St
Operator of a vehicle was stopped at a traffic signal when another vehicle crashed into his rear end. Both parties exchanged paperwork and were advised of future action that needed to be taken.

Malicious Damage/Auto: 9/26 at 2:45pm – Boylston St
Victim stated that he noticed that the left side of his vehicle had been keyed.
Posted by CSD Intern at 8:50 AM No comments:

Witness later reported that Pleasant Street near Dummer St he observed three black males taking off sweatshirts and stuffing them in backpacks and then continue on Pleasant Street toward Commonwealth Ave. Two black males were wearing white T-shirts and the third was wearing a red plaid T-shirt.

Larceny: 9/24 at 2:00pm – Harvard St
Victim stated that when she returned to retrieve her belongings that she accidently left on a table, she discovered the items missing.

Larceny-Bike: 9/25 at 5:38 – Oakland Rd/Franklin St
Officer responded to a report of 2 youths who had just stolen a victim’s bike from Robinson Playground. Victim stated that he and his son left the bikes unlocked against a fence. When the victim and his son went to retrieve the bikes, they discovered the bike stolen. Witness stated that the subjects are described as 1 white male and 1 black male with short groomed hair.

Approximately 508PM Brookline Police responded to St. Paul and Egmont Street for a reported armed robbery. Early reports of three victims, local college students, had been robbed and a hand gun had been shown. No one hurt, officers are looking for three subjects described as black males late teens. Personal property was taken from the victims. This is still an active investigation.
Posted by CSD Intern at 6:19 PM No comments:

Operating After Suspension: 9/24 at 10:08pm - Babcock St and Harvard St
Officer observed a vehicle make an illegal right turn on red. A vehicle registration check revealed that the operator had a Suspended License. Operator was placed under arrest and issued a citation.

Malicious Damage: 9/24 b/t 7:30 8:00pm – Hurd Rd
Officer was dispatched to investigate a damaged scooter. Victim stated that she heard something outside but did not investigate the noise. She later discovered her scooter was damaged.

Larceny: 9/24 b/t 11:00am & 3:30pm– Brook St
Officer responded to a larceny of a bicycle. Victim stated that she left her bike locked on a chain link fence, and later retuned to find the lock cut and bicycle missing.
Posted by CSD Intern at 8:19 AM No comments:

Larceny: 9/22 at 2:48pm – Washington St
Victim stated that he discovered his wallet stolen after dropping off a suspect on Beacon St. Victim stated that the wallet was left in on the center console. Subject is described as a White male, in his late twenties or early thirties, black hair, black beard, wearing a black hooded sweatshirt, blue jeans, dark colored sneakers or shoes, and carrying a tan back pack.

B&E&L of MV: 9/21 b/t 9:00pm & 11:40pm – Parkman St
Victim reported that her vehicle window had been smashed and her phone was missing. No further information is available at this time.

Malicious Damage-Auto: 9/22 at 10:00pm – Amory St
Victim stated that someone had just broken the rear window of his vehicle. Victim stated that he was in his vehicle making a turn when he had heard a loud bang from the rear of his car. Victim did not see anyone when this occurred or noticed anyone in the area afterwards.

Robbery-Firearms: 9/23 at 3:00am – Hamilton Rd
Officers were dispatched for an armed robbery with a gun. Victims stated that they were walking back to their apartment when two black male subjects approached them and took their wallet. Suspects displayed a handgun. Suspects are described as: Subject 1- Black male, 5'4 to 5'5, approximately 16 years old, wearing a white zip-up sweatshirt, blue jeans, and red baseball hat. Subject 2- Black male, 5'8 to 5'9, early 20s, wearing a stripped (vertical) blue and white polo shirt with long sleeves, blue jeans, and dark blue baseball hat. Investigation is ongoing.

Fraud: 9/17 at 6:00pm – Babcock St
Officer responded to a report concerning an internet scam. Victim received a fraudulent check from a sender who claimed that she wanted to hire the victim for a babysitting job.

Malicious Damage: B/t 9/21 at 7:30am & 9/23 at 1:00pm - St Paul St
Officer responded to a report for a past vandalism report. Victim stated that she returned to find a broken window on the first floor of her home. No one reports hearing or seeing anything suspicious.

Traffic Offenses: 9/23 at 12:55am – Beacon St/Kent St
Officer observed a vehicle to have a defective brake light. A query check revealed that the operator of the vehicle had a revoked license status. Operator of the vehicle was placed under arrest and charged with Defective Equipment (Drivers Side Brake Light), Operating Motor Vehicle After Registration Revocation, and Operating Motor Vehicle without Insurance.

Operating After Suspension: 9/23 at 4:23pm – Harvard St
Officer observed a vehicle with a defective headlight. A query check revealed that the operator of the vehicle had a suspended license status. Operator was placed under arrest and charged with Operating after Suspension and Defective Equipment.

Larceny-Bike: Occ b/t 9/22 at 6:00pm & 9/23 at 6:00am – Plowgate Rd
Officer responded to investigate a larceny of a bike. Victim discovered his bike had been stolen sometime during the overnight hours. Victim claimed that he found that the cable lock was cut off with bolt cutters.

Larceny: 9/22 at 6:25pm – Vernon St
Victim stated that she noticed that a portion of her bag was opened and discovered her wallet missing, as she was walking in the area of Beacon St and Harvard St. Later, she found that 2 fraudulent transactions were made to her account.

Invasion: 9/22 at 10:04am – Warren St
Officers were dispatched for a report of a white male who entered the monastery waving a flashlight around in a threatening manner demanding money. Officers observed the subject yelling very loudly at clergy members. Subject was placed under arrest and charged with One count of Home Invasion, one count of Armed Robbery, Three counts of Assault by Means of a Dangerous weapon (Flashlight).

Larceny: 9/12 at 1:30pm – Heath St
Victim stated that after she accidently left her phone in the bathroom, she returned to discover her phone missing.

Accident-MV: 9/23 at 11:15am – Horace James Circle
Officer responded to investigate a motor vehicle crash involving a motorist and a bicyclist. Victim stated that he was struck by a motor vehicle and sustained abrasions to his knee. Victim was transported to the hospital for further medical evaluation.

Malicious Damage: 9/21 at 6:26pm – South St
Caller requested officer assistance in a verbal argument that was taking place. Caller stated that prior to officer arrival; subject was very agitated and combative. Subject will be charged for Malicious Destruction to Personal Property.
Posted by CSD Intern at 7:16 AM No comments:

On 9/14/2012, a wallet was taken from a restaurant on Beacon St in Washington Square, Brookline. Surveillance footage has captured the subjects pictured below using the victim's credit card to purchase items. 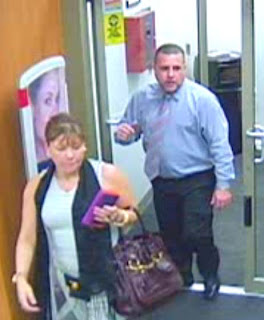 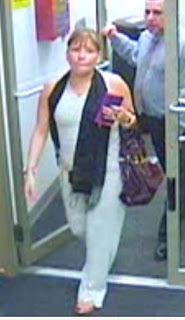 Anyone with any information regarding
these indiviualas is aked to please contact:

Posted by CSD Intern at 2:24 PM No comments: