11:36am: A theft was reported on Washington Street. A phone was left in a common area of a residential building, and was missing when the owner went back to look for it.


7:51pm: A bicycle was stolen from Brookline Place when it was left on a bike rack, possibly unlocked. The theft occurred at some point earlier in the day. This matter is under investigation.
Posted by CSD Intern at 9:41 AM No comments: 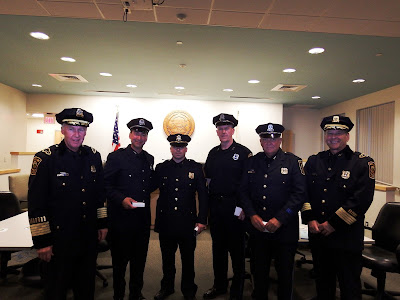 At Tuesday’s Selectmen’s Meeting, four Brookline Police officers were given service awards, which were voted on by their peers. We had a great ceremony with many officers, family, and community members there to show their thanks and support.
Officer Teahan was awarded Police Officer of the Year 2015. Officer Teahan began his service in 2003, and ever since has gained a reputation as a thorough, caring professional. He has worked many routes while serving in Patrol, and enjoys getting to know the community around him. He was chosen for this award after a year of great police work that included a number of arrests and life-saving CPR on a baby.
Officer McNeil was awarded the Brookline Public Service Medal. He joined the force in 1980, and has held numerous positions in Patrol, Traffic, and the Community Service Division. He coaches 3 sports in Brookline and is an involved fitness and nutrition instructor, both in the Department and in the Community. He is well-known for leading by example, always has the health of his colleagues in mind, and was voted unanimously to receive this award.
Detective McHugh was also awarded the Brookline Public Service Medal. Detective McHugh came onto the force in 1977, starting in Patrol and quickly working his way into Detectives. He has dedicated much of his time to educating teenagers about the dangers of alcohol & substance abuse, speaking for the past 14 years at St. Theresa’s School in West Roxbury. He is a great detective and member of the community, and was voted unanimously to receive this award.
Sergeant Amendola received a Commendation Medal after receiving five Certificates of Commendation, including two in 2015. One commendation was for his handling of a traffic stop involving a known firearms offender, in which Sgt. Amendola helped in a search that found marijuana, cocaine, measuring equipment, and a large sum of cash. In the second case, Sgt. Amendola was instrumental in saving a teen who was threatening to jump off a roof. Sgt. Amendola is a combat veteran who served in the US Army Reserve in Afghanistan, where he was awarded the Purple Heart, and is now a Patrol Supervisor and a supervisor of the SRT Unit.

5:24pm: A larceny was reported on Columbia Street. The nozzle of a garden hose was removed and taken from the yard of a resident. This occurred earlier in the afternoon.
Posted by CSD Intern at 11:02 AM No comments:

6/3/2016
3:34pm: A larceny was reported on Harvard Street. A resident’s wallet was stolen from their purse at a local restaurant. This is an active case.

6/4/2016
11:04am: A resident reported the theft of their bike from the West Roxbury Parkway. It was left unlocked and resting against a tree earlier in the week, when it is believed to have been taken.
Posted by CSD Intern at 11:21 AM No comments: